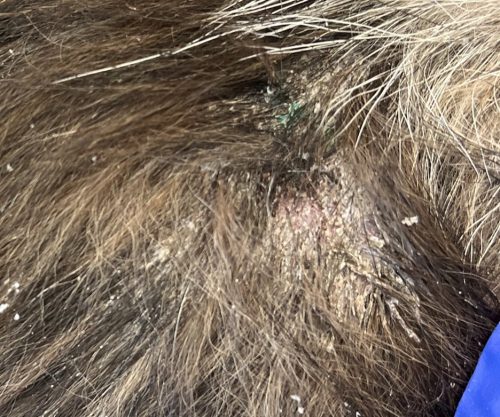 Written by Curtis Plowgian on 3 March 2022. Posted in Uncategorized

Felix presented for a 2 year history of progressive hairloss and dry skin. Oatmeal shampoos and itch-reducing medications such as Apoquel® and Cytopoint® were not helpful.

Felix is a 4 yr old MC Corgi Mixed Breed dog who presented to the dermatologist for a 2 yr history of hair loss and dry skin that has gotten progressively worse.  His skin did not seem to improve with allergy-relief medications such as Apoquel® and Cytopoint®, nor did weekly bathing with an oatmeal and aloe shampoo.  He was adopted as a puppy and had no history of skin or ear disease prior to age 2.

Dermatologic physical examination: BARH, BCS 5/9. Felix was somewhat nervous but amenable to physical exam. The trunk had generalized dry fine white scale with follicular (keratosebaceous) casting.  The flanks had a mild bilateral hypotrichosis.  The pinnae were similarly affected. The vertical ear canals were dry and had excessive scale with scant brown cerumen bilaterally. 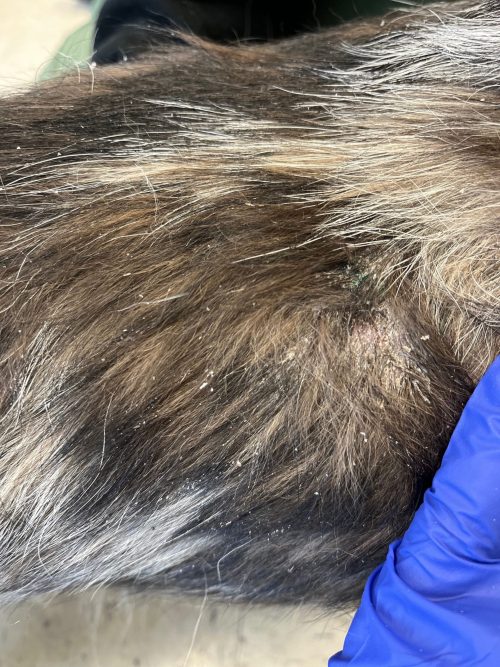 Otic cytology revealed a mild Malassezia (yeast) otitis externa, though skin cytology from the trunk failed to highlight any infectious organisms.  A deep skin scrape revealed no mites or ova, though abundant follicular casts were observed.  As Felix was slightly nervous, he was administered mild reversible sedation via dexmedetomidine (Dexdomitor™) IV. Four sites were selected  and locally blocked with a lidocaine-saline solution, and submitted for dermatohistopathology.

The biopsy results revealed granulomas around the hair follicles where sebaceous glands normally would exist, and as seen in end-stage disease, sebaceous glands were even absent entirely in some sections. These findings were consistent with sebaceous adenitis.

To provide the best experiences, we use technologies like cookies to store and/or access device information. Consenting to these technologies will allow us to process data such as browsing behavior or unique IDs on this site. Not consenting or withdrawing consent, may adversely affect certain features and functions.