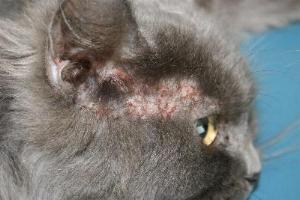 Management of a case of facial pruritus in a cat

Reason for the consultation:

Lin Fa, a 2 year-old female domestic shorthair was referred to us with a 4 month history of recurrent facial pruritus (August 2005).

Lin Fa was born in a garden and had been with her owner from the age of 3 months; since then, she had been living in a flat with one other asymptomatic cat. She had an upper respiratory tract infection (URTI) when first acquired, but had not relapsed since. Prior to the onset of her skin condition, she was fed various brands of supermarket dry and wet food. She got on well with the other cat, although the owner reported that she had always been very nervous and anxious.

The cat’s first episode of skin disease began 4 months ago, followed by a second onset 2 months later. The lesions remained confined to the head (skin cranial to the ears, periocular and perilabial areas). A positive response to corticosteroid treatment was noted. The second episode of skin disease occurred despite good owner compliance with an exclusion diet using hypoallergenic Royal Canin food. As for the current episode, it had started approximately two weeks ago. Since then, the cat was fed dry Hill’s Feline Z/D and her skin seemed to have improved slightly by the time we saw her. General examination: The cat had been lethargic for the last few days and her appetite was reduced. Purulent rhinitis, moderate conjunctivitis and pyrexia (40.1°C) were noted. The owner stated that the rhinitis had only started a few days earlier.

The cat presented with relatively symmetrical lesions, affecting the head only. The lesions were localised to the skin cranial to the ears, the proximal aspect of the inner pinnae (the vertical canals were also inflamed), and the periocular and perilabial areas. Erythema, crusts, scaling and, in some areas, hyperpigmentation were observed. Flea combing was negative. 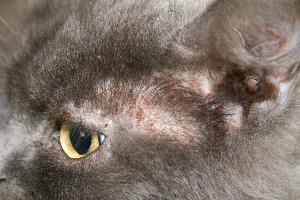 Erythema, excoriations and crusts at the base and cranial to the ears 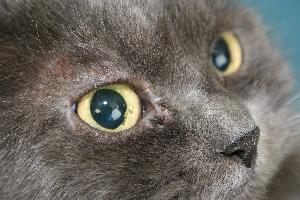 Erythema, excoriations and crusts on the eyelids 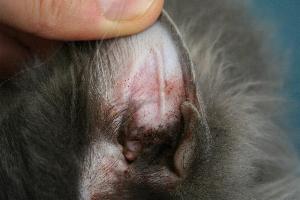 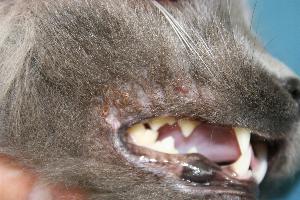 Erythema, excoriations and crusts on the proximal aspect of the inner pinnae

Diagnosis at this stage:

A specific diagnosis could not be established, other than the presence of a secondary superficial pyoderma.