Reason for the consultation:

A 2 year-old, neutered female Persian cat was referred to us with an 8 month history of facial dermatitis.

This vaccinated cat lived in a house with 2 other cats and one dog. Other than the chronic skin disease, it had no history of medical problems.

The skin condition first appeared around the age of 18 months, causing increasingly frequent facial lesions which eventually became chronic, with intermittent flare-ups. Daily local treatment was required, without which the cat would scratch intensively, further exacerbating the lesions. Corticosteroids appeared to have positive but transient effects. Recent FeLV/FIV tests had been negative. A blood test comprising routine haematology and biochemistry had shown no abnormalities, other than eosinophilia. All the animals in the household received 3 weekly flea treatment (Frontline® spray) and the environment was treated twice a year. General examination: General examination was satisfactory. The owner indicated that during flare-ups, the cat’s behaviour changed and she tended to isolate herself. She also pointed out that at these times, the cat often developed severe conjunctivitis, but no respiratory signs.

The skin disease was localised to the face only, affecting the eyelids, facial and nasal folds, lips and chin. There was marked conjunctivitis. The lesions were highly inflammatory with marked erythema. A large number of black follicular casts, adherent to the hairs, were noted in all these areas (photos). 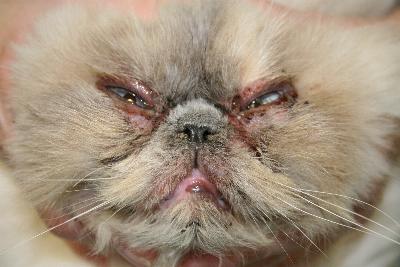 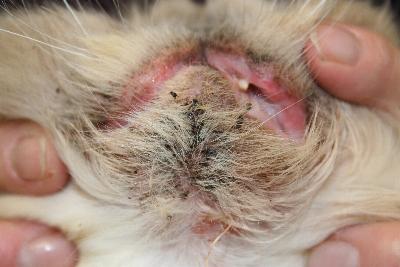 Presented with this highly inflammatory facial skin disease in a young cat, we considered the following differential diagnosis: allergic dermatitis (age of onset, pruritus, response to corticosteroids), dermatitis associated with herpesvirus infection (facial dermatitis and conjunctivitis), idiopathic facial dermatitis of Persian cats or IFDP (distribution, clinical appearance of adherent black debris, age, breed), or less probably atypical dermatophytosis or calicivirus infection. The clinical appearance of the blackish adherent material could also have suggested feline acne, but the latter only affects the chin and lips or occasionally the nasal commissure, and does not have such a widespread facial distribution. In all cases, complicating factors such as pyoderma, Malassezia dermatitis and/or secondary demodicosis had to be investigated.

The distribution and aspect of the lesions, together with the test results, were suggestive of idiopathic facial dermatitis of Persian cats. While this diagnosis was very likely, it was not definite. The cat was therefore started on an exclusion diet.