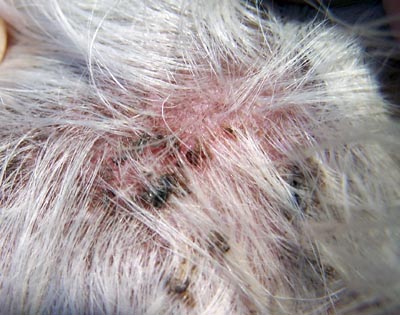 Dermatitis due to Otodectes cynotis in an adult dog

Mitsy, a 13 year-old entire West Highland White Terrier bitch, was referred at the end of September for a pruritic dermatosis which was refractory to corticosteroids. The bitch had suffered from pruritus for many years but for approximately 18 months the dermatosis, which had hitherto been limited to the feet, spread and became considerably more widespread. The bitch lived alone with its owner (a cat had also been present until one year previously) and had limited access to a small garden. No regular anti-parasitic treatment had been given.

The bitch was in good general condition and no anomalies could be found apart from a moderate adenomegaly of the superficial lymph nodes.

A marked pruritis reflex was present over the whole of the trunk. The coat was dull, greasy and yellowish. Hypotrichosis of the trunk was present. An examination of the skin surface revealed marked erythema accompanied by brownish crusts (Figure 1). The ears were seriously affected and the ear canal had narrowed to such an extent that it was impossible to perform an otoscopic examination. A yellowish exudate was present in both external ear canals.

A provisional diagnosis of dermatitis due to Otodectes accompanied by bacterial otitis was made. 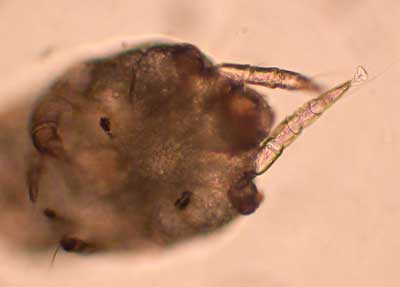