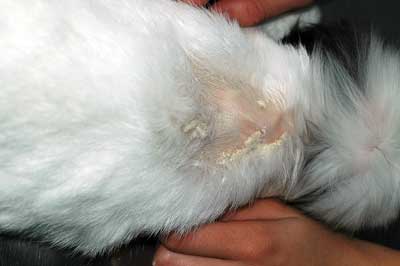 Pimpin was a castrated, 5 year old male dwarf lop rabbit, with no previous history of disease. He was brought in by his owners because lesions had appeared on the back of his neck, which had spread over approximately 2 months. Topical (chlorhexidine) and systemic treatment [enrofloxacin per os for 10 days (Baytril® )] had had no effect.

The rabbit’s general condition was satisfactory but progressive weight loss and reduced appetite had been noted over the previous month or so. Rectal temperature was within normal limits and cardiopulmonary auscultation was unremarkable. No abnormality was detected upon abdominal palpation.

Large scales were present on the dorsum (starting on the back of the neck, extending caudally and laterally). This localised keratoseborrhoeic disorder was accompanied by alopecia. Pruritus was neither observed in the clinic nor reported by the owners. Aural examination was unremarkable. 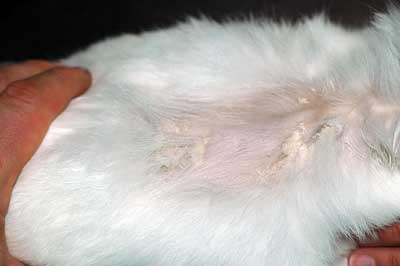 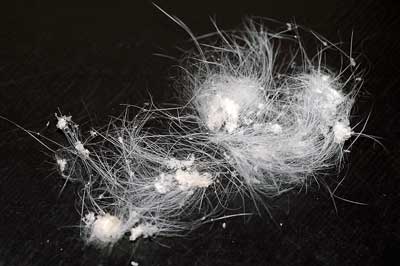 Cheyletiella infestation was the most likely cause of this non-pruritic keratoseborrhoeic disorder, but dermatophytosis (Trichophyton mentagrophytes in particular) or Leporacarus gibbus infestation could not be ruled out at this stage.

Coat brushing with microscopic examination of the collected material was carried out, together with an acetate tape preparation followed by microscopic examination without staining. These two tests enabled large numbers of parasites to be visualised, at all stages of development (figures 2 and 3). Under high magnification, these parasites were identified as Cheyletiella parasitivorax, a common ectoparasite of rabbits. 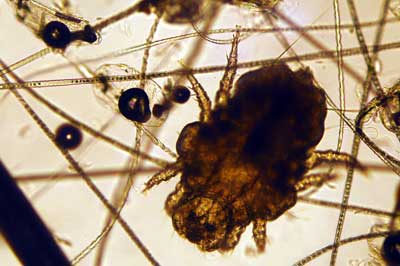 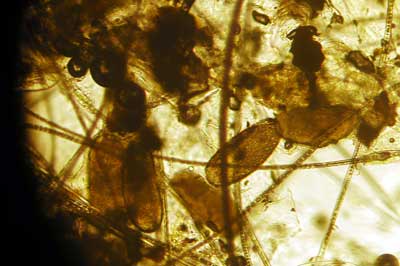 A diagnosis of Cheyletiella parasitovorax dermatitis was therefore established.

To provide the best experiences, we use technologies like cookies to store and/or access device information. Consenting to these technologies will allow us to process data such as browsing behavior or unique IDs on this site. Not consenting or withdrawing consent, may adversely affect certain features and functions.